Trees and forests of continental Asia

Expedition with Steve Backshall  episode  Borneo dark shadow  was on PBS,last night.
I didn't think it would be much but I was gobsmacked. They were in search of rock art in limestone karst caves. They were trying to get to caves found by a bird nest hunter, 20 years earlier. It took a week for them to bushwhack in. The primary uncut forest, the mountains, the caves were all incredible. The rock art was dated at 40,000 years old. The oldest in the world. I had heard something about that but didn't have context. They had the guy with them that documented it.
To get to the target cave they had to climb a very steep slope of jagged karst. One injury and you were in a bad way. It blew me away to think 40,000 years ago every inch of the terrain was searched by people with primitive gear. It was likely drier then with more grass savannah but it was still impressive. The terrain was brutal and gorgeous.
SE Asia has the tallest tropical trees in the world to 300 feet and it has the oldest tropical forest, as well. You could see huge emergent trees sticking up on the slopes. One amazing shot showed a plain running away from the mountain to the horizon with no human signs in sight. The host said deforestation was turning Borneo into a desert and was encroaching on the location.
PBS rebroadcasts this shows several times a week so you can  likely still see it. i didn't find more than previews on line. Highly recommended. 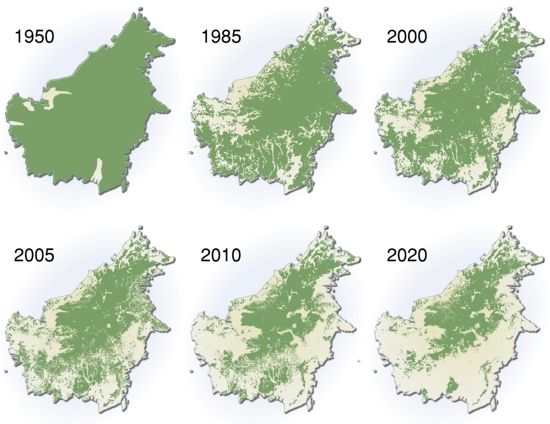 That map is really depressing...And now they are planning to move their capital to Borneo.

I guess if they want to save their forests their best bet is to determine how much forest it takes to support their birds. On the other hand, our species has a rather poor record of prioritizing long term sustainable income over a short term bonanza...
Top
Post Reply
2 posts • Page 1 of 1