Conducted a program last weekend to re-measure two of our tallest black cherries in the park, consequently the two tallest known in the Northeast located in the vicinity of Ridge Trail.

We were joined by a handful of very interested participants, one of which was in the lumber industry. After several chats and stops along the way with the group oogling tallish black cherries BEFORE we got to the good stuff, I finally had to resort to telling them that they'd have to put their blinders on if they wanted to see the really tall ones. I attempted to pass a tallish black cherry on the west side of the trail since we had never documented a cherry on that side in the 130ft class. I had some in the upper 120's years ago, but after being pestered I submitted to taking the time to re-measure it. Actually, I'm glad they pressed me to take the time to do it, since the tree turned out to be a new 130ft class black cherry coming in at 9.1ft CBH x 134.3ft! So, after swallowing a bit of crow, it was time to move on.

Next stop, trying to re-measure the tallest in the park, first measured by Will Blozan on 4/20/02 at 8.1ft CBH x 137ft high. I subsequently re-measured it sometime prior to 2011 at 8.9ft CBH x 140.7ft high. On 12/16/17, we re-measured it to 8.9ft CBH x 143ft high! Which I believe is still the tallest known in the Northeast. Not sure how it currently ranks with recent tall black cherry measures west and south of PA. This tree has always been a bear to measure. Trying to shoot through multiple canopies, interspersed with hemlock, birch & beech makes finding a window to the top difficult. I did have one shot that put the tree at 146.5ft high, which likely would've been a new Eastern U.S. height record, but... I was shooting through light snow, and the Nikon Forestry Pro laser only registered the long shot say 1 time out of 12. Since I couldn't repeat it from a different angle, I elected to stay conservative at the lower measurement. The lower measurement I WAS able to confirm from another location at only 0.2ft difference, so I feel confident the tree is at least 143ft high.

After that, we worked our way south along the contour, paralleling Forest Road until we came to the Pennsylvania state champ black cherry, the Karl Davies Memorial Black Cherry, last measured on 3/3/09 to 11.6ft CBH x 138.7ft high. This was a tree previously taped dropped & climbed by Will Blozan on 4/23/05 to 11.4ft CBH x 137.3ft. Saturday's new measurements on 12/16/17 now put the tree at an incredible 12ft CBH x 139.9ft tall! I confirmed the new height from an alternate location, but try as I may, I just couldn't squeeze in another inch for it to legitimately put it into the 140ft class. We also re-measured the crown with longest spread at 75.6ft giving the tree 303 American Forests big tree points. A picture can be viewed at the following link, although it'll be a little time before the website can be updated:

Here's some pics taken from several years ago:

It was a beautiful day to be in the woods at ground zero for tall black cherries in the Northeast.

Wow! Dale what an incredible Black Cherry. Blows away any that I've ever seen. Larry
Top

Man those things are growing well!

FYI- 150' has been breached several times for the species.

Awesome!!! Man I'd love to see them Cook black cherries. Here in the southeastern corner of Pa the max height is around 110'. Its been awhile since we've compared notes. Shoot me an email and maybe we can update the state Rucker Index. 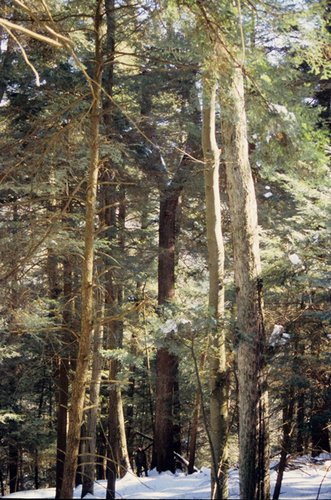 Is there a huge fork in that tree?
We travel the Milky way together, trees and men. - John Muir
Top

Those are some first-class cherries. It’s been several years since I went to Cook; I really should return soon. Thanks for the updates and photos,

Elijah
"There is nothing in the world to equal the forest as nature made it. The finest formal forest, the most magnificent artificially grown woods, cannot compare with the grandeur of primeval woodland." Bob Marshall, Recreational Limitations to Silviculture in the Adirondacks
Top
Post Reply
7 posts • Page 1 of 1