Slovakia is known for its numerous prime old-growth forest remnants. The largest of them (tens of square kilometres) are high-elevation Norway spruce (Picea abies) forests. The largest low-elevation old-growth forests, most of them dominated by European beech (Fagus sylvatica), are less than 10 km2, many of them being less than 1 km2 (=100 ha = 247 ac). Larger old-growth beech forests exist especially in Ukraine (88 km2=22,000 ac) and Romania (53 km2=13,000 ac). The preservation of Slovakian old-growth remnants results from their difficult accessibility, the late settlement of the mountainous landscape and the late industrialization of the country. The beginning of the industrial-scale use of the forest and the building of the road net coincided with the creation of the first reserves, i.e. in the late 1800s when there were still thousands of square kilometres of old-growth in Slovakia.

Recently I made a trip with my German friends Thomas and Julia to explore a few Slovakian old-growth reserves. One of them was Dobročský prales = Dobroč Primeval Forest or Dobroč National Nature Reserve in central Slovakia. The reserve is located on a north-facing slope at elevations 720–1000 m. Annual precipitation is 890–960 mm and average annual temperature 4.5–5°C. The reserve was established as early as 1912. The area was originally 50 ha (124 ac) and was later enlarged to 102 ha (252 ac). The original reserve is dominated by European beech and European silver fir (Abies alba), and the newer part by Norway spruce. Two views of the forest:

Thomas' photo. The tree with reddish trunk on the right seems to be Norway spruce. Other trees are European silver firs and European beeches.

The other trees we saw were sycamore maple (Acer pseudoplatanus), European ash (Fraxinus excelsior) and wych elm (Ulmus glabra). Thomas, who had been in the reserve a few years ago, said there are plenty of big Norway maples (Acer platanoides) at higher elevations where we didn’t visit this time. All these are common trees in European montane forests. The original part is otherwise very close to its natural state, but fir seedlings are missing – a result of roe deer and red deer (European version of elk) over-population in this region. The newer part of the reserve is less natural. The proportion of the fir in the reserve has decreased during the last decades and will further decrease if the herbivore pressure remains high. European silver fir does much better in eastern Slovakia where there are more predators, particularly wolf. For example in Stužica Reserve, which we also visited, there is plentiful fir regeneration, a rare sight in Central Europe today.

The reserve proved to be an optimal site particularly for European silver fir. The tallest firs previously were three 54-meter trees, one in Perućica, Bosnia (http://www.ents-bbs.org/viewtopic.php?f=382&t=4747) and two in Biogradska Gora, Montenegro. In Dobroč I measured at least five firs 54 m or more, and the tallest was 56.1 m (184 ft) with the CBH of 407 cm.

56.1-meter European silver fir. Other trees are mostly European beeches and silver firs. In the background probably Norway spruces, too.

The measurements, several decades ago, of Prof. Korpel’ (an important man in the history of European old-growth research) in Dobroč gave the max heights 58 m for fir and 54 m for spruce. This was not the first time that old tangent-measurements have given for fir greater heights than for spruce but laser-measurements suggest that the opposite is true. For my thoughts about European silver fir heights, see message #3 here: http://www.ents-bbs.org/viewtopic.php?f=382&t=4747. Prof. Korpel’ also measured a fir with 193 cm (76 in) DBH and 55 m3 (1900 cu ft) volume; that tree fell a few decades ago, the remains are still there.

Your discoveries/confirmations once again revel the superlative nature of many European forests, especially those in the eastern part of the continent. I was particularly interested in the Norway spruce. Even though non-native, the Norways have become one of my favorite species here in North America. The oldest ones on this side of the pond date to the latter part of the 1800s. So there are no really old ones, and we do not have a real sense of how large/tall they'll get if allowed to grow to near maximum longevity. Do you have a feel for what Norway spruce do in various parts of Europe at the age of around 100 years? I'd like to get a feel for what we might eventually expect out of the species to achieve growth wise over here. Maybe east-west comparisons won't work, but I'd like to see the numbers. The species was widely planted a hundred years ago in large areas of the eastern USA both as an ornamental and for timber. However, there seems to be an anti-Norway bias among many in the timber industry. It may be due to stand decline, especially stands that were planted in the 1930s and not subsequently managed. 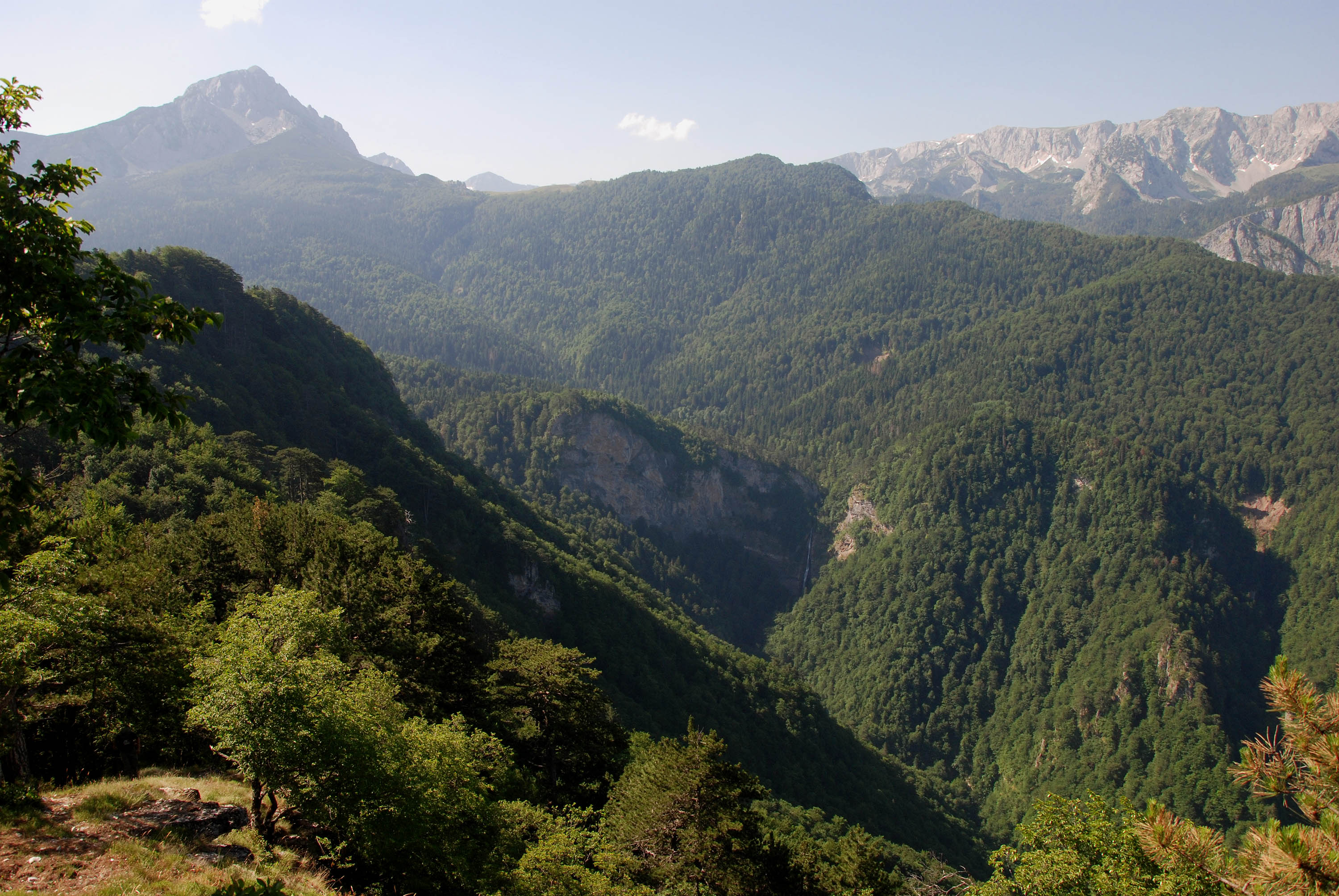 I find it instructive that the waterfall in the pic is 75 M or 246 feet. It gives a good idea of the height of the trees in the area for those of us that have never seen a tree over 80 ft.

I always knew this was one of the most beautiful areas in the world but wow!
We travel the Milky way together, trees and men. - John Muir
Top

Unfortunately, I have nothing that specific. It is easy to find growing curves for Norway spruce. If you search in German, for example, you probably get curves for German speaking countries (Germany, Austria, Switzerland). Two examples:
http://www.wsl.ch/forest/waldman/vorles ... ig26_2.gif
http://www.wsl.ch/forest/waldman/vorles ... ig53_1.gif
In the latter, Fi is Norway spruce (Fichte in German). Ta is European silver fir (Tanne), Lä is European larch (Larix decidua, Lärche) and Bu is European beech (Buche). I think your area is less favorable as the climate is likely more continental.

I have such a feeling that Norway spruce may be capable to reach ~60 m over most of temperate Europe, at least where it is native. Now we know such trees from the Balkans (Slovenia, Bosnia and Montenegro) and Central Europe (Germany and Slovakia). I am sure there would be ~60-meter spruces in many other countries but they simply have too little old forest. In most oceanic Europe, like the British Isles and Netherlands, Norway spruce does not do so well, the max heights being below 50 m. And of course in the boreal zone, it is lower, max. ~45 m.

Nice to see your measurements of Dobrocky prales! The heightmeasurements are not that much different from the old ones from 1964, beech is even very near their 46 m. Very nice you found a new European sine-laser record for Abies alba in the end. Would be interesting if you gave a more complete list of heights and (maximum) girths of the trees you measured. Are there no large Ulmus glabra trees in this forest?
I hope in the near future we can explore some more old growth forests in central and eastern Europe. Even a large part of Perucica still waits for a visit, but also the reserves in Romania.

Bob, what are your tallest Norway spruces at the moment? In the Netherlands it is not native, tallest are 42.4 m (139 ft) tall. These are 140 years old and grow between Douglas firs of up to 50.4 m (165 ft) of the same age, tallest trees in the Netherlands.

Outstandingly awesome post! Thank you. Have you forwarded the record height to Chris Earle (Gymnosperm database)?

Indeed, the measurements of Korpel' were not very different. I meant only the height comparison between fir and spruce. I edited the last paragraph a bit.

Due to the time shortage, I made exact measurements only for the trees that were potential site height records. I found the 56.1-meter tree at the beginning of the exploration (before it I measured two 52-meter trees). After that, all the firs were clearly lower, so I only stated "about 54 m", for example. There was also an "about 57 m" Norway spruce, almost next to the 58.1-meter tree. Also, I did not measure DBHs for the trees that were not site height champions, due to the shortage of time. Thus, unfortunately I don't have the list you are asking. But the positive side is that I had time to explore a good proportion of the original reserve.

No tall Ulmus glabra. Only one or two small trees seen.

Will, thanks for the congrats! I will write C. Earle.

Im amazed with the forest/specimens you find in Europe.

I made a scouting trip back in 2010 that resulted with one Norway spruce exceeding 140' and several others over 135'. This site also produced several Pennsylvania height champions that I've not yet reported on. Concolor fir height ~115',likely a new state champ overall. Douglas fir over 110'. European alder easily over 100'. Larches and red pine should exceed 100'. Ill have to check my records for specific details. American chestnut sprouts are also common on southern exsposures. Here's a link to the park. https://en.m.wikipedia.org/wiki/Nolde_F ... ion_Center

Although likely several feet taller now, the tallest Norway spruce I have witnessed in NA was ~151' as of five or six years ago. It was growing over a foot a year at the time. It is likely posted on this forum or the NTS site by John Eichholtz.

I have measured Abies alba to around 110' in NC.