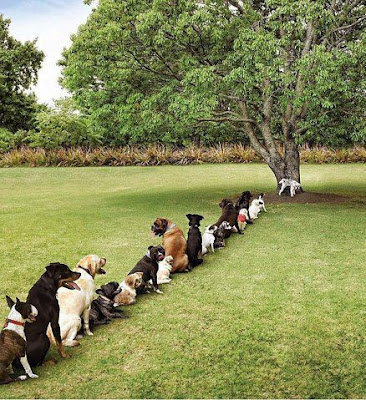 Over at Aeon, Anthony Alessandrini asks what happens when dogs piss on trees -- and suggests why we should care.

Conflict is inevitable — a conflict between dog-walkers and those who see themselves as protectors of the trees....

Until recently, I was unabashedly on the side of the dog-walkers. In fact, I was downright self-righteous about it. I saw it as a struggle over public space....

Then, a few months ago, I changed my mind. The short version is that I finally read a few simple scientific studies about the effect of dog waste upon trees and plants. ... the short version is: dog pee kills trees.

In the realm of “big ideas,” all this may seem like pretty small stuff. But being forced to change my mind about a seemingly insignificant part of daily life shook me deeply. This is because it spoke to something very large indeed: the relationship between humans and “nature.”

I had been seeing the problem as a conflict between humans.... I was defending the commons against incursions by property owners. Mine was the righteous side, the side of justice....

And, of course, he changed his mind and his way of looking at the conflict.

The short answer is YES.... maybe.

If you live in a high-volume and crowded city take a look at the lower foot or two feet of some of the smaller trees.

Does the bark, especially on corner trees, show fissures and cracking? Trees with cages around them won't show those marks because those cracks and fissures are mostly likely due to ammonia from dog urine.

Of course dog pee is only part of the insult given to urban trees.

Crushing loads from cars, lack of clean water, hot asphalt and concrete all push trees to the edge.

Add in the impact of bicycle chains, smacking car doors, and nails, tacks and screws used to affix posters and signs, and it's a wonder any city tree ever gets thicker around than your thigh.
We travel the Milky way together, trees and men. - John Muir
Top

Re: The ongoing crisis

Hilariously funny image for a really not funny situation. Thanks for sharing.

Re: The ongoing crisis