An extensive study of global habitat fragmentation -- the division of habitats into smaller and more isolated patches -- points to major trouble for a number of the world's ecosystems and the plants and animals living in them.

The study shows that 70 percent of existing forest lands are within a half-mile of the forest edge, where encroaching urban, suburban or agricultural influences can cause any number of harmful effects -- like the losses of plants and animals.
The study also tracks seven major experiments on five continents that examine habitat fragmentation and finds that fragmented habitats reduce the diversity of plants and animals by 13 to 75 percent, with the largest negative effects found in the smallest and most isolated fragments of habitat.

The study, led by a researcher from North Carolina State University and involving about two dozen researchers across the globe, is reported in a paper published in Science Advances.
The researchers assembled a map of global forest cover and found very few forest lands unencumbered by some type of human development.
"It's no secret that the world's forests are shrinking, so this study asked about the effects of this habitat loss and fragmentation on the remaining forests," said Dr. Nick Haddad, William Neal Reynolds Distinguished Professor of Biological Sciences at NC State and the corresponding author of the paper.

"The results were astounding. Nearly 20 percent of the world's remaining forest is the distance of a football field -- or about 100 meters -- away from a forest edge. Seventy percent of forest lands are within a half-mile of a forest edge. That means almost no forest can really be considered wilderness."

The study also examined seven existing major experiments on fragmented habitats currently being conducted across the globe; some of these experiments are more than 30 years old.
Covering many different types of ecosystems, from forests to savannas to grasslands, the experiments combined to show a disheartening trend: Fragmentation causes losses of plants and animals, changes how ecosystems function, reduces the amounts of nutrients retained and the amount of carbon sequestered, and has other deleterious effects.

"The initial negative effects were unsurprising," Haddad said. "But I was blown away by the fact that these negative effects became even more negative with time. Some results showed a 50 percent or higher decline in plant and animals species over an average of just 20 years, for example. And the trajectory is still spiraling downward."

Haddad points to some possible ways of mitigating the negative effects of fragmentation: conserving and maintaining larger areas of habitat; utilizing landscape corridors, or connected fragments that have shown to be effective in achieving higher biodiversity and better ecosystem function; increasing agricultural efficiency; and focusing on urban design efficiencies.

"The key results are shocking and sad," Haddad said. "Ultimately, habitat fragmentation has harmful effects that will also hurt people. This study is a wake-up call to how much we're affecting ecosystems -- including areas we think we're conserving."
We travel the Milky way together, trees and men. - John Muir
Top

It is no surprise that such a broad study (global forest fragmentation) paints with such broad strokes, eg,

"Seventy percent of forest lands are within a half-mile of a forest edge. That means almost no forest can really be considered wilderness."

In the global context, who among us would have ANY surprise that after several millenia or more on average, most civilizations have little wilderness left. Of course, the definition of "wilderness" becomes critical here, as per Malcolm Hunter, in his most exclusive of definitions, is of the opinion that man has impacted (if by no more than pollution -> climate change) everywhere on earth.
Using the stated USFS/NPS definitions of wilderness, the US clearly beats the 'norm' in terms of percentage of lands within a half-mile of a forest edge, with numerous large wilderness areas in the Western US and Alaska.

But the paper does serve a purpose, elevating concerns for the inexorable demands for forest products meeting the developing countries not yet caught up with the effects of their technology...
Don Bertolette - President/Moderator, WNTS BBS
Restoration Forester (Retired)
Science Center
Grand Canyon National Park
BJCP Apprentice Beer Judge

Don wrote: But the paper does serve a purpose, elevating concerns for the inexorable demands for forest products meeting the developing countries not yet caught up with the effects of their technology...

And those demands are not likely to lessen any time soon- so, what's critical, is that whatever forest is managed for human needs MUST be managed as well as possible- which is not now the case. So, just elevating the quality of such management will help a good deal to protect forest biodiversity.

And, I should think it's time for a serious discussion by world leaders to have an open discussion of what the long term carrying capacity for this planet is for sustaining the human race. Since the politicians won't- the science community will need to do it. I would think the carrying capacity for humans on planet Earth is probably no more than a billion. Lowering the population will be a difficult thing to do- but what's new there? The history of mankind is one big problem after another. It was always thought by most nations/empires/kinkdoms that the more people the better to create wealth and military power. I suggest what's needed is evidence that a SMALLER population will accomplish these goals even better.
Jo
Top

It's over. They can study this till doomsday and it doesn't matter. The fact is that humans have consumed almost everything and will have done before too much longer. Pretty much all of the ecosystems are going to crash--at least the ones that have birthed and supported us and the ones with which we are familiar. You can sugar-coat it or try to deny it, but the simple fact is that the planet cannot support 7 billion over-consuming apes. And the point of no return was reached some time ago so from here on out it's just hand-wringing for those who think they can save the place, or simple hubris from those who deny it's happening.

In a simple term: we're screwed. The entire species is screwed. As we experience a cascade of extinctions and the shutting down of our planet's familiar ecosystems, Homo sapiens is going to go away with everything else that we've exterminated. It likely won't happen in my lifetime, but soon. And I am watching the degradation beyond recovery of things once familiar to me. So my advice to everyone who loves seeing these places is to get your asses out and witness them while they're still in some way familiar and present. Go for a trip into a wilderness. Visit a National Park. Because the things we expect to see and experience are on their way out.
Top

I've seen that figure bandied about for a planet with no access to fossil fuels, which is an important point because of all the energy that goes into growing/transporting our food. Frankly, I'd like to think we could devise a better generation of fusion/fission reactors if we got our act together and put some real effort into it, but...the clock is ticking. For example, in the late 90's, everyone was assuming we wouldn't hit a 'bumpy plateau' in oil production until 2030. We hit that point in 2005, with the peaking of conventional petroleum production. It's anyone's guess when we'll fall off, and then five years later, when the reality sets in, the panicked flailing will begin.


Lowering the population will be a difficult thing to do- but what's new there? The history of mankind is one big problem after another. It was always thought by most nations/empires/kinkdoms that the more people the better to create wealth and military power. I suggest what's needed is evidence that a SMALLER population will accomplish these goals even better.
Jo

Sadly I don't think so, because of the most common response to resource constraints is to fight wars, and.... how do you win wars? By having a large population that can mobilize the most resources the fastest. Sure, on a local basis it's nice to think you could do that, but it's difficult to envision how you'd have the strength to fight off someone wiling to 'burn their seed corn' in order to accumulate the strength to come over and steal yours....so you'd end up burning your's too.
Top 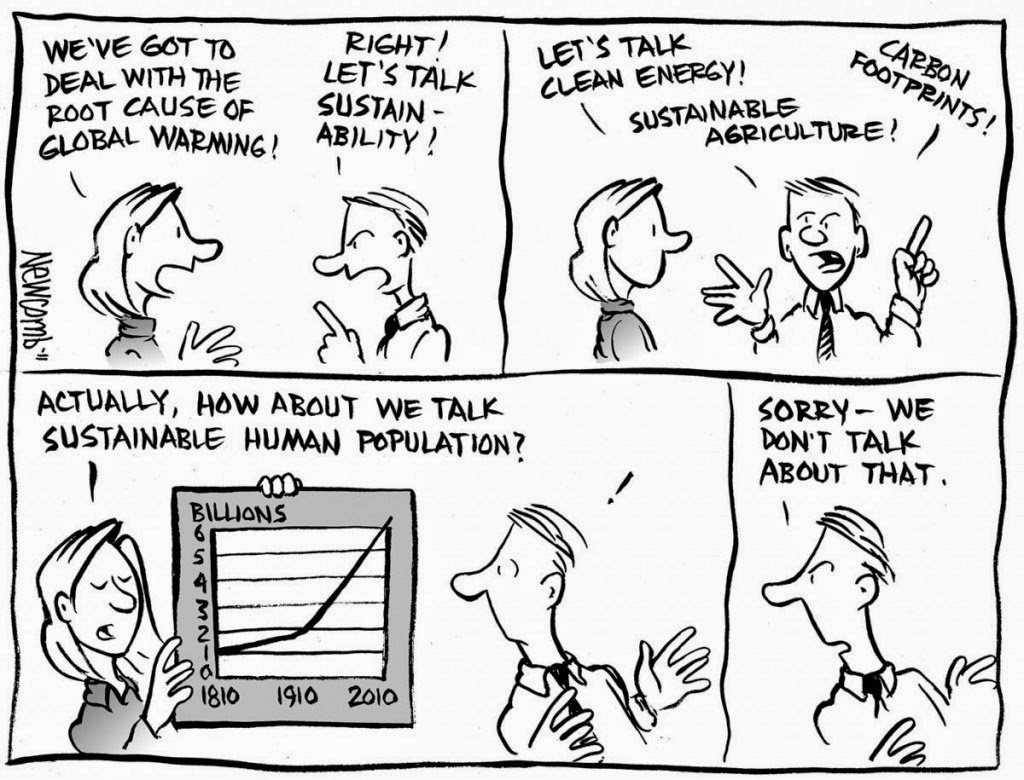 There are dissenting views but I can't see our survival without serious ecosystem loss.
We travel the Milky way together, trees and men. - John Muir
Top
Post Reply
7 posts • Page 1 of 1