NTS:
During October of 2015 I spent two half days measuring trees along the lower reaches of Glade Creek. The creek joins the New River about 10 miles downriver of Sandstone. Motorists traveling on I-64 east of Beckley, cross the creek on the highest interstate bridge in the east at 700'. High enough to base jump (illegally). The drainage area is about 40,000 acres and the creek headwaters at 2800 ft drops off the plateau to its confluence with the New River at 1200' . The headwaters have several impoundments for water supply which probably destroyed the glades.The area downstream of the Interstate bridge is within the boundaries of the New River Gorge and has been under National Park Service control since the mid 90's.
Trees measured were along the bottoms of Glade Creek on river right( ascending) within two miles of the trailhead near the New River. The largest trees measured include: 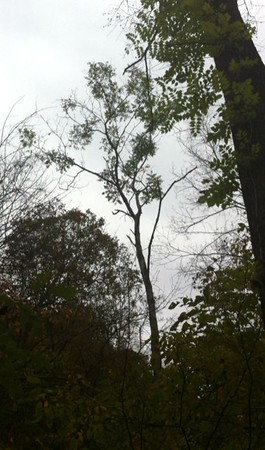 Timber was cut as early as 1891 in the upper reaches of Glade Creek on the plateau at Crow, WV where Beaty Lumber Company of Virginia constructed a sawmill. From this location Beaty Lumber constructed a narrow gauge railroad down the Glade Creek Canyon to the New River by 1897. This line was known as the Glade Creek and Raleigh (GC & R) Railroad. It operated as a common carrier until 1906 and trackage was removed in 1910. In 1922 investors financed a project to upgrade the abandoned rail bed to standard gauge and build a bridge over the New River to connect to the C & O mainline. The bridge was completed in 1923. They also constructed a band mill at the mouth of Glade Creek. Their main object was to produce and haul coal out of the area. However, other companies had obtained the best coal rights and had better access so the operation tried to survive on logs and lumber from an area that already been partially cut over by the Beaty lumber Company. They did so until 1928 until they sold out to Babcock Coal and Timber which went out of business several years later during the great depression. It is thought the bridge that was built over the New River was the longest and most expensive every built by a lumber operation in the East. It never hauled a car load of coal. The girder type bridge was dismantled during world War II and used on other projects in the coalfields of West Virginia and Kentucky to further the war effort.
The reminders of this operation are the concrete pillars standing in the New River serving as tombstones for the liquidation of some of the finest timber in West Virginia. A hiking trail follows the old rail bed along Glade Creek up from the New River.

Click on image to see its original size
Bridge piers remaining in the New River from the bridge constructed by Glade Creek Coal and Lumber. Completed in 1923, dismantled 1942.
Top
Post Reply
1 post • Page 1 of 1