It's a real nice tree too, about 32" dbh. Not an old-growth area, but certainly predates the ANF's ownership of the land for this area.

"There is no better way to save biodiversity than by preserving habitat, and no better habitat, species for species, than wilderness." --Edward O. Wilson
Top

Hemlock woolly adelgid, a tiny bug that poses a major threat to hemlock trees, has arrived in Warren County.

Signs of the invasive bugs were spotted by Kirk Johnson of Friends of Allegheny Wilderness while he was in the Webbs Ferry boat launch area of the Allegheny National Forest.

ANF Silviculturist Andrea Hille went with Johnson to the site where he found cottony, white tufts at the bases of needles on hemlock branches. She took samples and sent them to U.S. Forest Service Entomologist Rick Turcotte for confirmation.

From there, the samples were sent to the Pennsylvania Department of Agriculture.

Both the state and the feds confirmed Johnson's evaluation - Warren County is now positive for hemlock woolly adelgid. "The Hemlock Woolly Adelgid has been confirmed in Warren County," Department of Agriculture Deputy Press Secretary Nicole Bucher said. "This is an insect that has been in Pennsylvania since the 1960s and devastates the state tree the Eastern Hemlock."

The pests were found on the national forest, but that they were in Warren County, Pennsylvania, took precedence. "It's a big deal when we find something in a new county," Turcotte said. The department "does all of the final determination."

Johnson has been keeping his eyes open for signs of the creatures, but he didn't want to find them.

"This is a day I've been waiting for with trepidation for 10 years," he said.

"It kills hemlocks," Turcotte said. "In areas it's been there a while, we have seen extensive mortality."

Hemlock makes up about seven percent of the tree population on the Allegheny National Forest.

There used to be a greater percentage of hemlocks. Because their numbers have already dwindled, the trees have become even more valuable. "Now it's more important ecologically," Hille said. "Hemlocks are home to a huge number of insects."

The popularity of the tree with insect species is part of the problem regarding hemlock woolly adelgid. Birds that land in a hemlock to snack on some insects might carry HWA to the next tree they visit.

During their crawler phase, the adelgids can also be carried by the wind, Turcotte said.

They are also spread by human activity. "They've been moved around a fair amount on nursery stock," Turcotte said.

There is no "landscape scale" treatment for hemlock woolly adelgid, he said. "You can't treat a forest." Once identified, individual trees can be treated with chemicals. There are also biological agents that can be used on a small scale.

Due to limited funding, the Forest Service has to evaluate the extent of problems like an area of hemlock woolly adelgid infestation and what action is required.

"We need to delineate the extent of that infestation now," Hille said. "As a forest, we have that site and the one along the Clarion River, we're going to have to determine how we're going to approach those sites."

The public can help slow the spread and minimize the damage.

Johnson said he makes a habit of taking a look at hemlocks. Until two weeks ago, he had not found anything troubling. When he did, he contacted Hille and showed her the problem area.

"He did all the right things," Turcotte said.

The agencies have experts who know just what to look for, but their numbers are limited.

"The first thing is you have to find it," Turcotte said. "It's really hard to find, especially at a new infestation."

"That's why having the public's help is a major component of any of our insect and disease programs," he said. "We always tell people to do, if they see dying trees or something unusual in the trees, let the land manager know."

"It's amazing how something so tiny could be so devastating to a whole species of tree," Johnson said.

"They feed at the base of the needles... on the food reserves in the twigs," Turcotte said.

After the trees lose that source of nutrients, they decline and stop producing new growth, he said. Most of the trees' photosynthesis takes place in new growth areas.

Over a period of five to seven years, the tree dies.

Every hemlock woolly adelgid on a hemlock is female, Turcotte said. They essentially clone themselves twice a year, laying 50 to 300 eggs each time.

"They have a complicated life cycle," he said. The creatures spend the second half of their lives on spruce. In that stage, some of the insects become male.

Johnson, who is executive director of Friends of Allegheny Wilderness, is arranging a volunteer survey for hemlock woolly adelgid for Sunday, Sept. 8, in the proposed Cornplanter Wilderness Area.

"Members of the public with an interest in helping can contact FAW at info@pawild.org to sign up or to ask for additional information," he said.

Location is the Allegheny National Forest, west side of the Allegheny Reservoir within the north end of the proposed Cornplanter Wilderness Area: 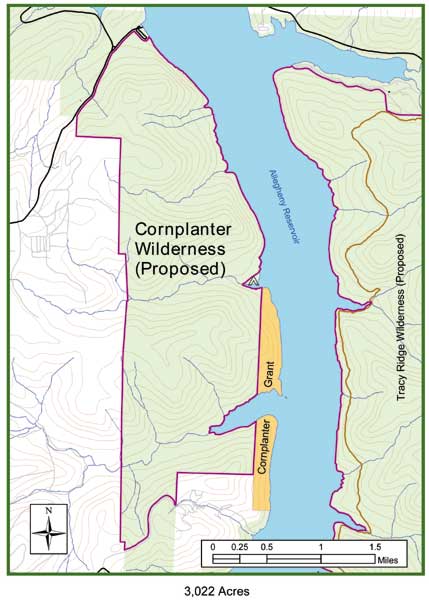 Click on image to see its original size
Last edited by PAwildernessadvocate on Tue Feb 24, 2015 11:31 am, edited 1 time in total.
"There is no better way to save biodiversity than by preserving habitat, and no better habitat, species for species, than wilderness." --Edward O. Wilson
Top

http://www.youtube.com/watch?v=aBBz_3n5RXI
"There is no better way to save biodiversity than by preserving habitat, and no better habitat, species for species, than wilderness." --Edward O. Wilson
Top

The FSC has recently formally listed imidacloprid as a "highly hazardous pesticide" (they published their new list on February 10th). I wonder how badly that will complicate efforts to treat hemlock trees for HWA?
"There is no better way to save biodiversity than by preserving habitat, and no better habitat, species for species, than wilderness." --Edward O. Wilson
Top

PAwildernessadvocate wrote:The FSC has recently formally listed imidacloprid as a "highly hazardous pesticide" (they published their new list on February 10th). I wonder how badly that will complicate efforts to treat hemlock trees for HWA?

Suspicion is growing that the neonicotinoid pesticides are a major contributor to the colony collapse disorder seen in honey bees, so I can see why they would be concerned. Any thoughts how dangerous treating hemlocks would be to honey bees (or other insects)?
Top

The chemical is pretty much immobile in the ground and soil. Honeybees don't feed on hemlock pollen and hemlock trees are gymnosperms - non flowering trees so there is nothing on them that will attract honeybees or anything for them to ingest to hurt them. The chemical for all practical purposes will only affect the insects feeding in the treated trees. The problem with imidacloprid is that it is used as a general insecticide and sprayed over everything - flowers, crops, fields, etc. This usage is a real problem in my opinion, but its usage in treating hemlocks will not have any effect on honeybees.

Ed Frank
"I love science and it pains me to think that so many are terrified of the subject or feel that choosing science means you cannot also choose compassion, or the arts, or be awe by nature. Science is not meant to cure us of mystery, but to reinvent and revigorate it." by Robert M. Sapolsky
Top

Found it in the Hickory Creek Wilderness Area over the weekend. :-(

"There is no better way to save biodiversity than by preserving habitat, and no better habitat, species for species, than wilderness." --Edward O. Wilson
Top

Will Blozan wrote: My experience with treatment projects in PA is that contractors are gouging and ripping off the State at the expense of the trees. Pricing I have seen is criminal- up to 20X what is being charged here in WNC.
Will

Sounds like grossly incompetent state bureaucrats who are capable of finding out what the cost should be and making sure the contractors are truly competing on price- perhaps they're giving the contracts to their friends.
Joe
Top

I haven't seen hemlocks dying from this disease in Mass. but I'm sure others have. I see the bugs but no dead trees, so far. How about you other Mass. folks?
Joe
Top
Post Reply
20 posts