This preserve was made possible by a gift of the heirs of Samuel Gross to the Division of Natural Areas and Preserves via the Ohio Chapter of The Nature Conservancy in 1980. Although small in size (49 acres), Gross Woods is one of the least disturbed old-growth woods in west-central Ohio and one of the few mixed-species swamp forests remaining in this part of the state.

The woods are characterized by a diversity of tree species, with no one type being dominant. Large bur oaks and basswood occur in the wettest areas, with shagbark hickory, white and red oaks, black walnut, beech and sugar maple on slightly drier ground. The rare pumpkin ash is also present here.

The display of spring wildflowers and the brilliance of autumn colors makes visiting Gross Memorial Woods rewarding at any season.

I visited this preserve in April 12, 2008, and measured a few of the biggest trees. It was only a few years after a serious ice storm, so many of the softwood trees had suffered a lot of branch breakage - silver maples and basswoods in the swampy sloughs. Beeches on the higher ground were also heavily affected. A boardwalk makes a broad circle through the woodlot giving the casual visitor a good coverage of the forest. In general, the forest gives the appearance of an aging old growth forest, with many large canopy gaps and abundant downed logs. This is especially apparent along the exposed northern boundary, where high winds from summer thunderstorms sweep in from a large open expanse of agricultural fields. The landscape is very similar in appearance to Lawrence Woods (only ~45 minute drive further north) a series of very low swells interspersed with shallow swampy sloughs. The difference appears to be that Gross woods is much much older, and the wet areas having already lost their oldest trees. So the tallest and largest trees are on the high ground in the center west portion of the preserve:

The tragic part of this story is the western half of the woodlot that isn't part of the preserve. It's full of old stumps, so apparently half the old growth was liquidated, probably right before the preserve was created.

A few pictures of the largest trees:

Another old oak I didn't measure

Good show. You've added one moe Ohio site to the explored and documented list. It helps put all sites into perspective. The red and white oaks would be outstanding in New England.

I think the big White oak is the biggest I've seen in Ohio. There are two in Goll Woods that are pretty close though. I think this is the first site I surveyed for ENTS, but it was a little underwhelming on the whole and I never got back to finish the job.
Top

Randy- Awesome White Oaks. I really like your graphics and the photos of the Crowns are very vivid. Great job! You guys are making me want to come up to Ohio for a visit. Larry
Top

The trick with the photos is to take them very near sundown. That way the main illumination is from the side, casting the gold highlight all up and down the tree. If you take such pictures during the day, the main illumination is from the sky directly above. Quite often the range of brightness between the sky and the dark branches is too much for the camera sensor to grasp, so one extreme or the other is washed out. So you can adjust the camera 'exposure' setting to either see the details of the branches against a washed out sky, or see a blue sky but details of the branches will be all black.

Modern cameras work around this problem by taking two pictures at two different exposures and then digitally combining them into one 'High dynamic range' picture. Standalone software can do this on pc after the fact as well.
Top

That Red Oak has that characteristic lean to one side. I see that quite often with this species even on a flat surface. How does that effect the accuracy of your circumference? Ideally it should be perpendicular to the main axis of the tree. A breast height measurement throughout would create an oblique oval rather than circle. Should one measure the circumference diagonally, say 4.0 ft on the short side to 5.0 ft on the long side, to get a more accurate circumference? This tree has a minor lean, but some trees can lean quite a bit on a flat surface. Thanks.
Last edited by sradivoy on Fri Dec 05, 2014 7:34 pm, edited 1 time in total.
Top 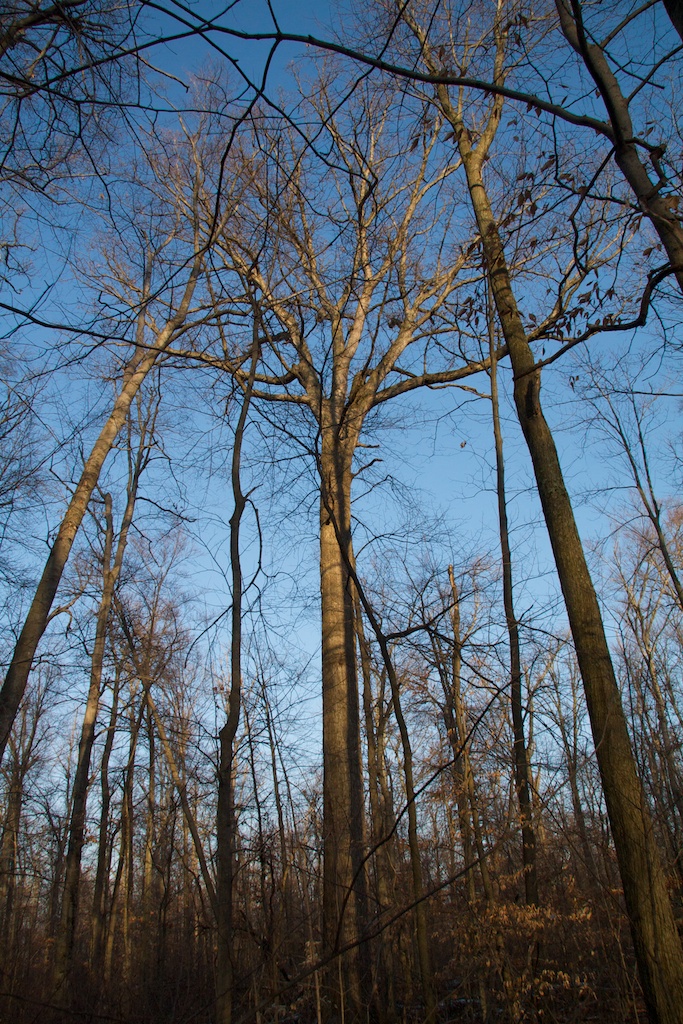 
A Great White, indeed!
We travel the Milky way together, trees and men. - John Muir
Top

sradivoy wrote:That Red Oak has that characteristic lean to one side. I see that quite often with this species even on a flat surface. How does that effect the accuracy of your circumference? Ideally it should be perpendicular to the main axis of the tree. A breast height measurement throughout would create an oblique oval rather than circle. Should one measure the circumference diagonally, say 4.0 ft on the short side to 5.0 ft on the long side, to get a more accurate circumference? This tree has a minor lean, but some trees can lean quite a bit on a flat surface. Thanks.

Yeah, that's the right way to do it, and it's how I do it now. However, this was a while ago so I don't remember if I did that in this case or not.
Top

Great bit of old growth, It does lift your spirits just to walk through this sort of forest. Since working with Bob Leverett I have become spoiled as I survey the New England forest that most people would be impressed with, and see the results of recent logging, where it was either clear cut or high graded within the past 80 years. Impressive oaks.
Top

Thanks for all the information and pictures of Gross Woods. I was there about 25 years ago and then again about a year ago. It's a great place. I didn't realize the white oaks were that large, and I figured the ones at Goll Woods were bigger, but I never measured any of them.

You mentioned that the white oaks in Gross and Goll Woods may be the biggest ones you have seen in Ohio. That would be the case for me as well. I know there are bigger white oak trees in Ohio as measured by the point system but based on pictures, those trees are all open grown with huge girths, which in my mind I place into a different category. Open grown trees don't have to face the competition that forest grown trees do, so I really appreciate the size of a giant tree growing deep in a woods. I believe it's the timber part of me that gives me this view. Over the years I've cut a few logs out of our family farm woods, so when I see a big tree with a long clear trunk I think in terms of the potential of the volume and clear quality of the lumber.

There are a few other places in western Ohio that have some nice (non open grown) white oaks. I visited a large metro park woods southeast of Dayton a few years ago that had a group of three large white oaks. I can't remember the name of the park... One of those trees was listed for a time in Ohio's big tree register, but it did have some lower branch stubs that was indicative that it was perhaps partially open grown at some point many years ago. There is also a nice grove of white oak trees growing on the side of a slope in Kendrick Woods near Spencerville, Ohio. Kendrick woods is 100+ acres of natural hardwood forest that was donated to Allen County (I believe) several years ago. The white oaks aren't terrifically large, but I would say well over 3' diameter.