Can This Be Ohio?

Can This Be Ohio?

The mission to Fort Hill, Ohio enters the annals of NTS. The intrepid team of Matt Markworth, Rand Brown, and yours truly continued the significant tree documentation process for the Arc of Appalachia Preserve System, a remarkable organization run by a remarkable woman by the name of Nancy Stranahan. I'll defer to Matt and Rand to recount their experience, but we will be planning future joint events with Arc of Appalachia. for the present, I'm satisfied to revel in the memories of the beeches, oaks, tuliptrees, blackgums, hickories, etc. in E. Lucy Braun's beloved mixed mesophytic forest and of our stay at the Zen House. From the writings of others in the guest book, all are moved by the spirit of the place, and I came across an entry by none other than my good friend Joan Maloof.

We arrived at the Highlands Nature Center mid-afternoon on Oct 27th and I immediately began exploring our surroundings. Matt, Rand, Tom Robison, and Dan Boone were at Fort Hill hunting for special trees. I could add nothing to that intrepid group, and Monica and I were pooped, so we stayed local. That evening Monica, Matt, Rand, and myself dined at Nancy's house. She prepared a scrumptious German meal. By evenings end, it was clear that an Arc of Appalachia - Native Tree Society cooperative partnership had been foretold in the stars. What a great group of folks!

On Wednesday, we met Matt and Rand at Fort Hill to visit the huge Moses sycamore. Its dimensions have already been reported. It is one of the great eastern trees. So many of the huge sycamores branch low, but not this one. The weather threatened, so we didn't go up Fort Hill and Monica and I visited Serpent Mound and the museum there. Lots of fine blue ashes on the property.

Thursday, Monica and I explored the Big Beech Loop Trail across the road from the Highlands Nature Center museum. Here is an image of just one of many large beeches we passed.

Its stats aren't shabby: girth of 12.1 feet above the lower burl and height 101.2 feet. I also measured a blue ash (I think) at 112 feet. I couldn't get to the tree, but the characteristics visible from a distance matched. The twigging is distinctive, as is the bark.

Then there was the Zen Oak just beyond the cottage we were staying in. I immediately bonded with that great northern red, which becomes a member of the prestigious 12 x 100 club. Its stats are girth = 12.1 feet (just like the chestnut oak) and height = 112 feet (just like the blue ash). Conspiracy going on here?

Just down stream from us an old tuliptree reaches to 137 feet in height. That is the tallest tree that I measured at the Sanctuary.

Then there is Rocky Fork Gorge and Creek. Is this Ohio?

The Dolomite cliffs harbor stunning wildflower displays in the spring. And there are a number of caves in the area that harbor rare bat populations. The caves are off limits to exploration. Bats come first.

The forest is not overpowering in size, but the tuliptrees in the gorge are ancient, I expect many to exceed 300 years in age, if not 400. Most of the tall tulips are in the 120 to 134-foot height range. There are old eastern red cedars growing along the lip of the gorge, but I don't have a feel for how old.

I encourage members to visit the Arc of Appalachia website. This part of Ohio will become a focus for NTS activities in the future, and I've said nothing about the rich Hopewell and Adena cultures that flourished in past millennia. The mound are reminders of civilizations gone by that harbor secrets. The mounds will be the subject of a future post. So much to do, so little time.

wow, Bob, that beech in your first photo is the nicest one I've seen- I like the the buttresses at the bottom- something seldom seen in New England- showing what a mature beech might look like

the fact that we seldom see truly mature specimens of trees makes me think, "what if we never saw a mature elephant and only saw those a few years old that are only 3-4 feet tall?"

that would be a shame--- which again, I keep repeating, I'd like to see somebody write up an essay telling the world why we ought to find out the full potential for tree growth-
Joe
Top

Your words are not lost on me. However, every time I've started to put my thoughts down on why we need mature trees and to know the maximums attained by various species, I find my writing degenerating into a tirade on how destructive and shortsighted our species is. That may make me feel better for a couple of hours, but accomplishes nothing. In recent attempts at the essay, the audience I have had in mind wasn't the general public, but professionals who should already know better.

Your analogy to the elephant is apropos. It can be extended to virtually all species. Once the environment in which a species flourishes is degraded or the species is over hunted/harvested, etc., we lose perspective on what the degeneration means, not only for the species, but for the environment as a whole.

Bob, I think answering the question as to why it's important to know the potential size of trees could be a classic intellectual work setting an example for similar, dare I say profound questions as to our relationship with the Earth.
Joe
Top

dbhguru wrote:
Here is an image of just one of many large beeches we passed. 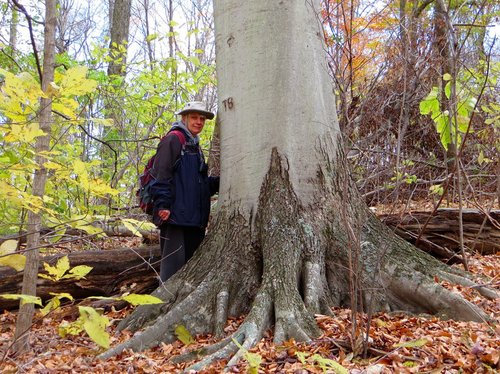 I wish we had them like that here.
We travel the Milky way together, trees and men. - John Muir
Top

The formal report on Highlands Nature Sanctuary is attached. I'll leave it to Matt and Rand to report on Fort Hill.

It would be a better world if more "retired" people spent their time as productive and creative! Nice report and your photography only gets better by the day!
Joe
Top

Excellent write up and photos. I greatly enjoyed reading it. I really like how the numbers serve a supporting role with the overall emphasis on the what makes the place so special.

I plan on writing about my experiences at Fort Hill in the form of a personal narrative (from the standpoint of an amateur naturalist) and I'll attempt to effectively weave in the numbers and the memorable moments with others I was with.

Also, I talked to the overseer of the youth camp again and there aren't any known names for the big sycamore, so I see no problem affectionately referring to it as the Moses Sycamore.

Excellent. I look forward to your description of Fort Hill. I'm sure Nancy will be thrilled to read it. It is just the style she prefers.

Do we dare share with the others some of the names we were considering for the big sycamore? Probably not, huh?

Awesome Bob- I love Beech trees. We have some nice ones throughout the south the next time I see and big one I'll get some measurements. Ohio really has some beautiful trees. Larry
Top
Post Reply
11 posts