Welwyn Preserve is Long Island's other Big Tree old-growth site described in Ancient Forests of the Northeast (along with recently reported on Shu Swamp). It also received a bit of ENTS attention in 2004 when Ed Coyle measured a number of trees, including many 140'+ tuliptrees, red oaks to 128', and the tallest sassafras on record for NY state at 107.3. A black birch at the same height was another superlative.

In the time since then, Welwyn Preserve suffered serious damage stemming from Hurricane Sandy- but largely at human hands. News articles I read while researching the site summarized the story: members of a local trail-running group found that just days after the hurricane while most of the island still lacked power and water, a firm with a pre-existing contract with the county for post-disaster damage control were in the preserve, felling trees and sectioning their trunks into marketable logs under the guise of ensuring trail safety. The fellow who led the pushback that successfully prevented the contractors from felling any more trees and removing the wood they had already cut still walks in the preserve every day, so it was a surprise in the moment but statistically favorable that I encountered him there by chance. When he learned I was studying the trees, he told me the whole story in first-person and showed me many of the felled trees. Mostly they were red oak, thick straight boles with not a hint of structural instability and sectioned for the mill. Fresh, they'd have been worth thousands, but more importantly were a priceless environmental and aesthetic asset still standing. It's a shame. These were the oaks standing among the gallery of the tallest, straightest tulips, and likely would have been the best of their species in the preserve. At least the tree-poachers had no economic interest in tuliptrees, beech, black birch, or many of the others...

One of the tall black birches rises in the center of this photo. I wonder if the removal of many red oaks 4 years ago boosted some of these birches with the extra light availability.

I spent most of my time in the wet lower valley of the preserve, which widens outward towards the bay. The features of this section remind me of a fusion of Inwood Hill's sheltering bowl and Shu Swamp's rich wetland forest. Both gnarled veteran and youthful towering tulips create a supercanopy that's neither as tight as Inwood or as open as Shu Swamp, and a diversity of other trees fill in the main canopy and midstory. The understory includes many thick sections of rhododendron, which impaired measurement in many cases. Large portions of the floor are also flat wetland. This site would benefit from an intensive measurement during the cold season, as the many non-evergreen shrubs and vines already in full leaf present an absolute visual cacophony obscuring the lower sections of many trees.

This is in New York State in April?

That this forest was once considerably more open is strongly suggested by both the spreading veteran tulips and by a scattering of very large open-grown white and black oaks, which are now shaded and slowly falling apart. Heights on many of the oldest trees are just moderate, but the subsequent generations are really putting it up there. This site is definitely marked for many returns to better document its composition and superlatives. I didn't have time to explore the dryer upland forest in the southern portion of the preserve, but this is indicated to have a lot of potential as well. At the edge of that section I encountered a black oak that becomes the new state height champion, and is I think one of the most beautiful trees I've ever encountered.

Erik- Nice post. You are really starting to pile up numbers on the BBS Congrats on your finds and keep posting. I enjoy your stuff. Larry
Top 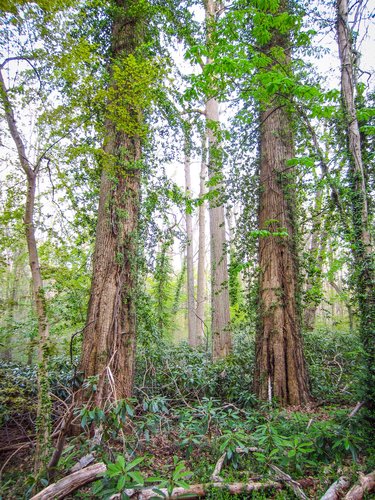 Might help with those vines, etc.
We travel the Milky way together, trees and men. - John Muir
Top

After planning to head to a promising site upstate today, an assessment of the city traffic situation led me to reroute to Welwyn Preserve. I had unwittingly left my D-tape at home and wasn't feeling great anyway, so I figured I might as well salvage the day with an effort to really get into every corner of the preserve an push up the rucker. I left my rangefinder set to feet for easier addition, but intend to do more precise measuring of the tallest specimens when I can get back with a tape and really focus in based on what I found today.

The somewhat dryer, higher elevation section I mentioned previously turns out to be where the best stuff grows. I initially went back into the same dense section of tall tulips further down and put a real kink in my neck scanning 148 after 149 after 148 again, in vain pursuit of a 150 that just wasn't there. Wouldn't you know, the head of the little valley is packed with 150+ trees. Further searching could well yield a contender for tallest tree in the state and I wouldn't even rule out a chance of 160'. Taller individuals of nearly every species showed up in this section, including a surprising new state max on Black Birch. I made sure to replicate my reading from the opposite side of the tree, just to be sure. The only tree I did take time to measure more precisely was the beautiful black oak, which I was unsurprised to see gain a little height; the Bushnell I was using last time seems to shoot about a yard short compared to my trupulse.

With increasing Hickory knowledge I was also surprised to determine that the most common Carya here (though I will upload photos to get some second opinions on this) is Mockernut, with some specimens quite tall. I did also finally find some Yellow Birch, and discovered that a large portion of the understory near the old homestead is Japanese Maple that appears to be reproducing successfully as an understory tree. A section of white pine that looked promising near the shore turned out to have been badly battered by Sandy, with no standing trees seeming to exceed 100'. There was a nice post oak down in there with them, at least. Measurements for today:

Well done. That's a whole lot of tall trees. I look forward to seeing photos of the hickories. Also, you'd have to check what the current height maximum is for Black birch, as your tree is at or near the tallest known.

Elijah
"There is nothing in the world to equal the forest as nature made it. The finest formal forest, the most magnificent artificially grown woods, cannot compare with the grandeur of primeval woodland." Bob Marshall, Recreational Limitations to Silviculture in the Adirondacks
Top

Looking around a bit it looks like the tallest record for Black Birch I can find is 118.8 for North Carolina. Long Island is not where I would necessarily expect to find a new species maximum for Black Birch, but based on the many other 105'+ specimens here, including the 112.8' tree at Tiffany Creek nearby, the rather young and slender form of this tree, and the many additional specimens of similar form that I have left unmeasured there, I am not even sure that 120' is an anomaly for the area. There are a lot of black birches in these oak-hickory forests that are just skinny light-seeking missiles. I will have to sample this species more thoroughly at this site soon.
https://flic.kr/s/aHskRDyuEH
http://www.inaturalist.org/people/er1kksen
Top

Today (Monday 12/19) I had time for another trip to Welwyn to focus in on more careful measurements of several specific trees. First was the Black Birch that I had previously measured to not less than 120', which Elijah pointed out would be a new species maximum. I'd like to note that this specimen follows a pattern that describes several of the other tallest black birches I've seen, which are all young, thin trees rising up to a narrow paintbrush crown that sweeps sideways into some canopy gap, including the 112.8' specimen nearby at Tiffany Creek. I'd suggest that Black Birch in such a form may represent the greatest heights at many sites and that as such trees age and develop more girth and crown structure they may discard some of the upmost sprigs to spread a more subordinate canopy. Having less impressive boles, they may also be less likely to draw attention to be measured. I would imagine there are taller individuals of this species hiding somewhere in the Smokies (where the previous maximum was measured in 2004), but for today this tree reigns supreme:

Tall black birch seen from a distance, circled in green.

Myself for scale at the base of the tall black birch

Unfortunately this tree has a nasty-looking fungal infection at the base.

I measured one more black birch, an older specimen.

Returning to the tallest Hickory, I had my mind changed yet again- unfortunately at some point it had stuck in my mind that Pignuts only ever have five leaflets and have finer twigging, which led me to think these tall trees with 5-7 leaflets and thick, twisty lower twigs must be mockernut. Further review shows that I was simply confused. The very much glabrous nature of the foliage and buds and relatively thinner husks on the fruit suggest the dominant hickory at this site to be Pignut after all. I remeasured the 120' tree from a better vantage point and found a much higher top.

Fruits look most like Pignut to me though the husks seem to separate nearly all the way down like ovalis, but that could just be decomposition.

I stopped to measure a nice Black Oak that came to 114.1' tall- which was just as well since I also stopped by the tallest Black Oak, the tree I've referred to previously in this thread, and noticed that clinging leaves on sprouts low on the trunk seemed odd- bizarrely, this tree turns out to be a white oak. As there's not a hint of scalyness to the bark on the whole trunk, it's very dark in color, and the majority of the leaves on the ground are black oak, I don't feel too embarrassed by this mis-ID; but it's a bummer.

Looking up the black oak that turns out to be a white oak...

Last I worked on the Tulips for a good while, seeking that 160'. It didn't come, but I recorded a few of the largest and also the tallest, the tree I had previously put at no less than 157'. With today's measurements it becomes the second-tallest recorded in NY state. The grouping it's in follows a shallow ravine down the hill where many trees top 150' but few top 155'.

Tallest tuliptree is leftmost of the trio in the center of this photo, with a dark green area painted in to point at its base.

Excellent work! Now I have to find a new black birch record.

Will, you KNOW the smokies region has to have taller black birches than Long Island (though the excellent glacial soils there and mild maritime climate do put up some impressive growth up here). Look for the unassuming beanpoles sneaking up into canopy gaps!
https://flic.kr/s/aHskRDyuEH
http://www.inaturalist.org/people/er1kksen
Top

I don't know that the Smokies have taller black birch. They are relatively easy to find at 95', somewhat easy at 100' but 110' is difficult and 115' has been topped just a few times. I'm not just talking about the Smokies but the Southern Appalachians as a whole. 120' just isn't happening and not for lack of searching. Congrats!
Top
Post Reply
12 posts