In my continued excursions with David Burg of Wildmetro (and botanist Zihao Wang and photographer Farzana Benabdeljalil), old field-grown white oaks are a recurrent theme. The legacy of oak savannah ecotypes naturally occurring in the past but now disrupted by post-colonial land use preferences persists in the presence of a scattering of truly ancient trees, lucky survivors from the very earliest days of european expansion or even earlier, as well as younger specimens grown in analogous circumstances like horse pastures which have been delineated by the same stone walls and corner trees for centuries. Some old oaks are recognized and celebrated, others ignored in back fields. The Granny Oak of Pelham Bay and the oak in Woodlawn Cemetery, both in the Bronx, belong in this category but are reported on in park and NYC-specific threads. Since most of these other SE NY great oaks do not in themselves constitute a full "site" to report, all that I visit outside the NYC limits will be reported on in this thread.

On Sunday 2/28/2016 we visited the Bedford Oak, located (as one might surmise) in Bedford, NY. This great tree is truly one of the oldest-looking in the region, and fortunately is beloved and protected by the town. This might be the first tree reported on in these boards that features on Martha Stewart's personal blog (she's a Bedford resident, I guess). This tree is freely accessible to the public, standing in a field alongside route 22 surrounded by an old stone wall; a very substantial sycamore grows through the wall in a way that suggests that the sycamore and wall must be of similar vintage. The Oak itself is, according to a plaque nearby, over 500 years old- likely a bit of an overestimate, as is often the case with large historic oaks. Nevertheless it is likely well over 300 years old and could exceed 400. I personally have never seen such massive sprawling limbs, generously carpeted in moss, except in childhood memories of visiting live oaks in coastal Georgia.

One end of the Bedford Oak's sprawling crown

From the other end of the crown, Zihao standing nearby for scale

The Bedford Oak measures 20.6'cbh, 69.3' tall and has an average crown spread of 114' and maximum crown spread of 129'. Its AF points total of 345 puts it just four points behind the Granny Oak of Pelham bay. A reduction cut in 2013 or 2014 may have reduced the crown spread somewhat, but at least one long limb is supported by a wooden post rather than being trimmed. It's also the greatest girth I've seen on a white oak; there are larger specimens in Schoharie and Pawling that I'll have to get to. The nearby Sycamore measured 16'cbh by 98.7' tall.

The full setting of the Bedford Oak, with the Sycamore along the stone fence

After that we headed up to Baxter Preserve in North Salem. Baxter preserve contains some woodlands and some very large sugar maples but is a landscape dedicated first and foremost to horses. First we went to visit a tree some picnickers were sitting beneath. This oak measured 14.7'cbh and 68.7'cbh and had an average crown spread of 90.2'.

A nice tree probably in its second century

Following that we visited an oak David had seen up a private dirt lane adjacent to Baxter preserve, after we asked a fellow tending chickens if it was alright to do so. This oak, also an old pasture tree, measured 14.8'cbh and 67.3'cbh, with an average crown spread of 95.1'.

Considerable swelling near the base- is white oak susceptible to fungus-driven trunk swelling like english oak is?

Just a few hundred feet up the stone fencerow I could see another large oak, so I ran up to measure it. This tree turned out to be more impressive than the previous two, and even moreso as a large section of fallen trunk (a previous secondary stem) had been cut and moved so that I could see a ring count of what looked like 200 rings or more at a cross-section of the main secondary stem at a level of maybe 20' off the ground when living. I measured height and then struggled through a briar to wrap my tape... at which point the landowner rolled up and expressed displeasure at our presence. He calmed down after we explained what we were doing and that we had asked permission, though we were informed that the permission we were given was not sufficient and given contact information for the land trust in case we wanted to seek permission to further such activities in the future. I do hope to do so.

The longest limbs sprawl down a hillside 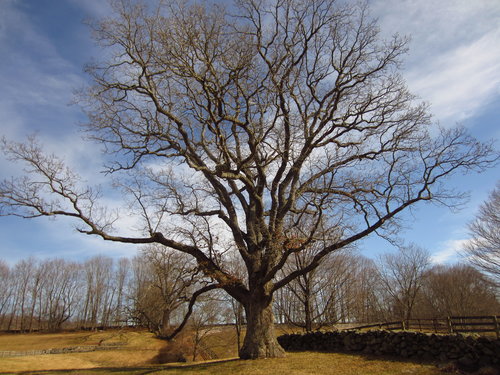 Click on image to see its original size
Considerable swelling near the base- is white oak susceptible to fungus-driven trunk swelling like english oak is?

First I have heard of this. Interesting.

There are some nice trees in your report.
We travel the Milky way together, trees and men. - John Muir
Top

I do occasionally see sizable burls on white oaks but haven't seen much as far as swelling at ground level. It may be more common among open grown white oaks. The scarlet oak bulges are much more common.
Top

I wonder if it's more likely in white oaks whose settings have been specifically used as pasture at some point, if perhaps manures and occasional minor damage or root trampling by large animals are factors in introducing fungal agents (which don't necessarily seem to reduce tree lifespan, just affect growth form and cause swelling). I'm even inclined to wonder if the Granny Oak of Pelham Bay and the Bedford Oak are of similar ages, but display differences in fungally-influenced (Bedford) and non-infected (Pelham Bay) growth forms, with a more squat and gnarled form factor in the Bedford Oak.
https://flic.kr/s/aHskRDyuEH
http://www.inaturalist.org/people/er1kksen
Top

Erik- Beautiful images of one of my favorite trees White Oak. The Bedford Oak is truly a gem and so much resembles a Live Oak. Larry
Top

Erik Danielsen wrote:I wonder if it's more likely in white oaks whose settings have been specifically used as pasture at some point, if perhaps manures and occasional minor damage or root trampling by large animals are factors in introducing fungal agents (which don't necessarily seem to reduce tree lifespan, just affect growth form and cause swelling). I'm even inclined to wonder if the Granny Oak of Pelham Bay and the Bedford Oak are of similar ages, but display differences in fungally-influenced (Bedford) and non-infected (Pelham Bay) growth forms, with a more squat and gnarled form factor in the Bedford Oak.

Sunday 8/6/2017 I returned to the Bedford Oak with most of the same crew; WildMetro has initiated a project documenting old trees in the greater NY metro area, with a particular emphasis on open-grown oaks, so I've been travelling the area as the primary measurer/documenter of the trees. There will be plenty more to report on in the next few months; this post will be a bit of a drive-by. The Bedford Oak is in decent shape, but its highest top is partially dead, so it's lost a couple feet in height. The lawn beneath the tree is kept very tidy and mowed short, which concerns me. Observing serious declines in other oaks in the region and seeing some new research coming out of Europe I've developed a hunch that soil ecology in the root zone of these large, old oaks is critical to their resilience in the face of events like last year's extended drought. They are, after all, self-mulching organisms- continually removing any organic matter that accumulates in the root zone does not seem wise.

The unmowed area of meadow surrounding the Bedford Oak is pleasingly biodiverse, and we documented a number of wet-meadow plant species that indicate high-quality habitat as well as a diversity of birds and invertebrates.

Following this we traveled to the Henry Morgenthau Preserve nearby to find another old White Oak that's mentioned on the preserve's website. This appears to have been a boundary tree and overlooks a small wetland. Additional documentation for this preserve will be developed in the course of this project as it contains a number of radiant old pasture and ridgetop trees (some oak, some sugar maple) that predate the surrounding regrowth.

Last, we traveled to the Ward Pound Ridge Reservation to document the historic "Bolton Oak." This is an old ridgetop tree, not especially large (and possibly in decline). Nearby is a younger white oak of competitive size, also with radiant growth form but rooted on a steeper part of the slope and competing well with the thicker surrounding regrowth. Additional radiant trees are scattered throughout this section and will all be documented in the course of this project, but for the most part do not present exceptional size or carry historic connotations like the Bolton Oak.

I don't mean to detract from the substance of your post or inflate your ego, but the first photo of the Bedford oak is beautiful. The tree looks like it would fit right in a lineup of Larry Tucei's live oaks.

Elijah
"There is nothing in the world to equal the forest as nature made it. The finest formal forest, the most magnificent artificially grown woods, cannot compare with the grandeur of primeval woodland." Bob Marshall, Recreational Limitations to Silviculture in the Adirondacks
Top
Post Reply
8 posts • Page 1 of 1